The 2020 MESEA conference, which was scheduled to take place in Larnaka/Pyla, Cyprus, May 27-30, 2020, hosted by UCLAN Cyprus, will be postponed until 2021. An announcement with an update will be posted in the fall.

On November 9, 1989, the East Berlin’s Communist Party announced that citizens of the GDR were free to cross the country’s borders, leading to speculations of a “world without borders.” Yet, as Elisabeth Vallet argues, a renewed emphasis on wall-building since this epoch-marking event has become a “global phenomenon.”[1] As this trend is gaining new momentum with the recent electoral victories of nationalist populists across Europe, in Israel and in Trump’s United States, borders are fortified and walls built to “protect” polities or to keep out refugees and migrants. We contend that these walls, borders and barriers are not only physical but also ontological and, as BREXIT shows us, ideological borders can be just as debilitating to liberal values and ideas. The 2020 MESEA conference will enable the discussion of the power of nationalist ideas that promote such borders and the ways through which activists and artists work to challenge, combat or break them down, often using utopian ideas of post-nationalism or transnationalism. As Johan Schimanski and Stephen F. Wolfe note, “Bordering is ordering, othering and negotiating difference”; however, apart from producing “B/ORDERING processes of EXCLUSION and inclusion,” borders can “surface as aesthetic FIGURATIONS – narratives or tropes – which can also interrogate their including/excluding function.”[2]

In addition to geopolitical and ideological contexts, the significance of borders is emphasized in the era of the climate crisis. In global terms, climate change also literally alters the physical geography of borders, undermining vulnerable communities worldwide as well as creating schisms between political and economic groups, as climate change deniers disregard, condone or even actively promote and facilitate the continued exploitation of the earth’s natural resources. The malleability of such borders, the threat to them from denier ideology and the vulnerability of those living in these liminal spaces will also be key themes in the conference. The contestation of ideological as well as natural borders, walls and barriers will also be a central focus of this meeting.

For the twelfth MESEA conference we welcome papers that look at the ways in which literature, film, and other art forms as well as social and political activism critically engage with climate change and (shifting) physical borders, and/or virtual, social, political, and cultural ones. The conference welcomes intersectional approaches to its topic, including but not limited to perspectives that include race, gender, ethnicity, class and sexuality. Environmental Humanities perspectives are especially welcome to shed light on the gathering catastrophe that these border-strains presage. Held in Cyprus, within the liminal UN Buffer Zone that divides the island, this conference will provide a forum for discussions on the global climate crisis, the effect of borders on competing ideas of nation and religious belief, as well as the ways in which artists and activists work around these difficult issues.  We welcome papers that revel in the fact that borders can be significant nodal points for the exchange of new ideas as well as papers discussing the representation of borders, barriers and walls, in literature, film, and other cultural and artistic expressions or in legal, economic, and social situations. This conference operates as a platform for critical and cultural interventions in the variety of debates around contesting walls, borders and barriers from postgraduate students, academics, artists and activists across all disciplines in the arts and humanities, social sciences and science.

Potential paper and panel submissions can but are not limited to work around the following topics:

Proposals should be submitted to our website at  https://mesea.org/ between August 20 and November 30, 2019. Submitters will receive notification of acceptance by January 6, 2020.

Preference will be given to complete panel proposals with an inter/transdisciplinary and/or transnational focus. Panels may not include more than 2 participants from the same institution. Presenters must be members of MESEA or MELUS in 2020-21.

[2] Johan Schimanski and Stephen F. Wolfe, eds. ‘Intersections: A Conclusion in the Form of a Glossary.’ In Border Aesthetics: Concepts and Intersections. Berghahn, 2017, 149. 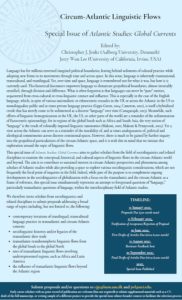